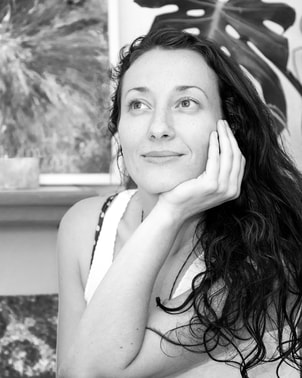 Artistic roots of Alisa are inspired by her fascination with the Universe, Light, Love, Symbols, Dreams and Texts that transforming into spiritual reality that exists in her mind and soul. Alisa’s interest is in creating abstract motifs with messages of Love & Light that will inspire people and energise them with positive vibes.

Alisa is also inspired by religious and spiritual texts such as the Old Testament, the Talmudic Midrashim, the Kabbalistic Book of Zohar, the New Testament, the Baha’i and  Buddhist writings, as well as philosophical texts, and the people, that she had the privilege to get to know on her life path of finding mutual meaning across different spiritual cultures.
​
Five years ago Alisa returned from Nepal, where she lived for one year and learned Tibetan Thangka Art in a Thangka Painting School in the Himalayas.

In the last 15 years Alisa lived and worked in the field of arts, creative education and social justice in Ukraine, Israel, USA, Sweden, Austria, Hong Kong, Slovakia, Nepal and Germany. Each country and culture she lived in contributed to her artistic process in a profound way.

At the moment Alisa is guiding creative workshops, yoga sessions, tibetan art courses in her studio in Berlin and around the world.


from 2010 book covers for various celebrations and ceremonies


Multiple art & creative projects during one year volunteering in Nepal, 2013-2014